I love music and am a product of 80’s music and Neil Diamond was a big part of the music I listened too.  I love adult contemporary music and his music just makes me sing out loud no matter where I am.  And I am so excited now about his new album coming out on October 21st called Melody Road. 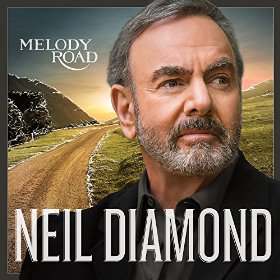 I was honored with a chance to listen to his new album and if you are a Neil Diamond fan, you are going to love this one.  While listening I found myself humming along.  The album reminds me of a sunny day enjoying being lazy out on the back porch.

Neil is one of the world’s best selling artists with over 125 million albums sold to date and this will just add to his total success as a singer and song writer.  Throughout his musical career, Neil Diamond has charted 37 Top 40 singles and 16 Top 10 albums in the U.S. His most recent original studio release, 2008’s Home Before Dark, debuted at #1 in the U.S. and the UK on the Billboard Top Albums chart.

A Grammy Award-winning artist, Diamond is a member of the Rock and Roll Hall of Fame, the Songwriters Hall of Fame and a recipient of the Sammy Cahn Lifetime Achievement Award, one of the highest honors bestowed upon songwriters.  Diamond’s many other achievements include a Golden Globe Award, 13 Grammy nominations and 2009’s NARAS’s MusiCares Person of the Year award.  In 2011, Diamond received the prestigious Kennedy Center Honor for his lifetime of contributions to American culture.

When the movie Jazz Singer came out, I think I was first in line for the 8 track of that score.  Yes, 8 track!!  My very young son would get in the car and would say, “Merica!”  His favorite song was America.  He loved his music as much as I have over the years.  He even composed a half time show with his music.

I love all the songs on this album, but I think the song First Time is my favorite and will have me singing for some time to come.  I love the beat.  It just makes me happy.  Something Blue made me dance in my chair.  Fun music is the only way I can describe this album.

How about a little taste of Something Blue

I participated in the Neil Diamond Melody Road album review program as a member of One2One Network. I was provided a free album to review but all opinions are my own.